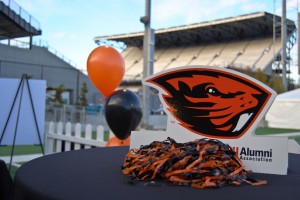 Had the pleasure of being a volunteer at the Oregon State Alumni Association’s away game tailgater up in Seattle this past weekend. Despite the loss to the Huskies, I enjoyed the opportunity to meet a bunch of Beaver fans and alums, and “cover” the event for their social media campaign. You can actually see their album of photos from the event over on their Facebook page.

Covering an event like this is quite different, but I enjoyed it, and given the 7:30PM kickoff, I was sure glad I brought a Speedlight and a diffuser with me. Inside the tent, it was still dark enough to need some flash, but the diffuser allowed me to avoid washing out the background, and having red eyes everywhere!

Of course, that also meant carrying around my camera bag all night, but hey, that came in handy for a few photos in the stadium too, which is another post. 😉

Find the warmth and the sun while you can. #batonr

A beautiful morning on the water. A bit chilly but